On 8 March, in celebration of International Women’s Day, the Johannesburg Stock Exchange will ring its bell in support of gender equality. This is part of a global bell ringing ceremony hosted by more than 50 stock exchanges around the world, to raise awareness of the role that the private sector can play in advancing gender equality. Other initiatives such as the 30% Club, which launched in in the UK in 2010 with the goal of achieving a minimum of 30% women on FTSE-100 boards, have highlighted the issue of gender diversity in corporate leadership. Gender equality and the empowerment of women and girls is also Goal 5 of the Sustainable Development Goals.

While South Africa has made some advances in improving gender equity in the private sector over the past decade, there is clearly still work to be done. The Kigoda Gender Diversity Index shows that of the 104 companies that will form the JSE’s Top 40 and mid-cap index following the March 2018 quarterly changes, 29 companies (28% of the total) have 30% or more women on their boards. However, only three companies have women CEOs, and only 10 have women CFOs. Ten companies are also chaired by women or have women lead independent directors. Of the 1194 board positions at these 104 companies, only 23% are filled by women. 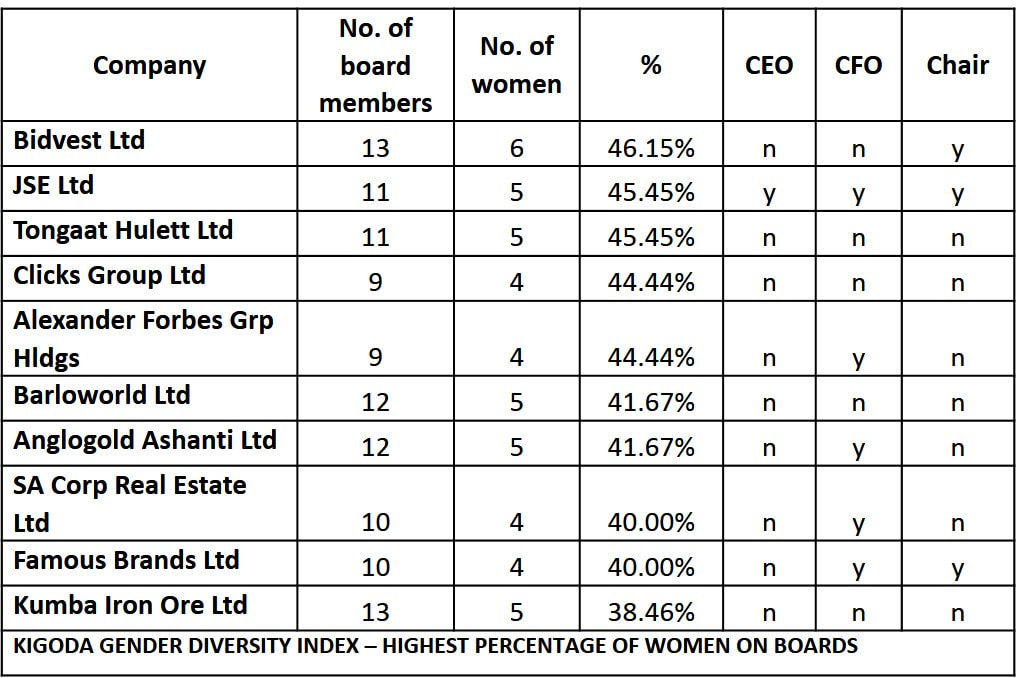 For investors, efforts to address gender diversity can be important for reasons beyond the moral imperative to promote gender equality in the workplace. Although academic studies have not conclusively shown that there is a positive relationship between board gender diversity and company performance, investor research suggests that gender diversity can impact positively on investment returns. In 2015, for example, MSCI found that companies in the MSCI World Index with “strong female leadership” (defined as a company with three or more women board members, or a woman CEO and woman board member, or a board with an above average percentage of women) generated a return on equity of 10.1% between December 2009 and August 2015, compared to 7.4% for those with companies with fewer women leaders.

State Street, which offers one of a growing number of gender diversity index investment products (although none yet cover South Africa), argues that the business case for gender diversity is that “greater diversity leads to more perspective, less group think, better decision making and better financial outcomes”. Similarly, MSCI also found that companies that lack board diversity experience more controversial corporate governance events than average. These arguments are especially pertinent in light of recent corporate governance failures such as Steinhoff and African Bank, both of which were weak in terms of gender diversity at board level.

If asset managers are to fulfil their commitments to incorporate environmental, social and corporate governance (ESG) factors into their investment decisions, it is important that they evaluate board composition. This should include the length of time directors have been in their roles, independence and diversity, both in terms of race and gender. While the JSE (which has a female CEO, CFO and chairwoman) introduced a listing requirement that companies should have a formal policy on promoting board gender diversity, and should report to shareholders annually on how this policy has been applied, it is clear that many companies are failing to comply.

Furthermore, the pace of change with respect to gender diversity appears to have slowed. According to a Businesswomen’s Association of South Africa (BWASA) survey on women in leadership, the percentage of women in senior leadership positions 2017 was 28%, only slightly up from 26% in 2004. Compared to non-executive board appointments, there are also too few women in senior executive positions, where they have far more influence over company culture. This might be related to the fact that too little attention has been paid to the diversity of nomination committees.

Questions also need to be asked of the asset management industry itself, which has come under increased scrutiny for its own lack of diversity. While the focus has been largely related to issues of transformation, a 2016 study found that fewer than 10% of South African fund managers are women. As with gender diversity on boards, there are benefits to having a more diverse asset management industry. To accelerate advances in gender equality, asset managers must not only advocate for board diversity in the companies in which they invest; they must also focus on applying these principles to their own organisations.

Sign up to receive occasional updates on industry news and regulatory developments.